ok, so i’ve been in pissy, fucked off mood the last few days.

woke up sunday morning after one of my favorite directors at work’s birthday party, with what i thought was just a (well-deserved, jaegermeister-induced) hangover. a few hours later though, after regurgitating my breakfast and then not even being able to keep down any water, i realized that i had a spot of food-poisoning or a tummy bug. unfortunately i have a propensity for stomach ailments (once even landed up in hospital on morphine hallucinating playboy bunnies with cloven hooves as a result, but that’s another story). i spent all day weak and feeling sorry for myself while the b.f. was out using my car, seeing that he recently wrote his off.

he finally gets home hours after he said he would and immediately starts being pissy with me about the state of the kitchen, wanting to know what i’ve been doing all day. uh, throwing up, or as i overheard a girl proclaiming loudly at some party, “it was coming out of both ends of me! *giggle, giggle*”. didn’t you hear me on the phone, earlier? then he wants me to help him clean the kitchen which is still dirty from when i prepared food for us and our guests the night before. that just pissed me the fuck off. so feeling like crap, i cleaned the kitchen while he sat on his ass. no sympathy for the fact that i’m not feeling well, just judgement. 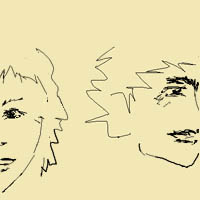 monday i wake up still unsure of my stomach and with a foul pissy-mood hangover from the night before. there’s little communication between the b.f. and i and what there is, is seriously squiff. mercury has for sure turned retrograde . communication once again gone for a ball of…

later a close friend who spends hours bending my ear about the sundry dramas of her life, calls up and says she’s coming over, then calls to say she wants to meet with the b.f. – alone – at a local restaurant. huh? he wants to use my car. by this time i’m in fucked over overdrive. no. take a walk.

i’ve been having a major e-mail fight with my american accountant who handles my american taxes about paperwork he wants from me. more mercury retrograde communication crap which is not improving my mood. my separated-from-husband has been driving my car and has gotten a ticket (a moving violation – which in the states is a big deal) which he’s not dealt with and which will now go on my record. now i have to sign paperwork to stop the fine from being doubled. fuck!

not having a printer or fax makes carrying out these mundane tasks somewhat difficult. so i go to the local postnet to print out the form, sign it and then have it faxed. i realize that i need to stay away from home or i will kill someone. i decide to take care of myself. i go for a manicure and pedicure – something i took for granted in l.a., but now a luxury i rarely allow myself since i’ve moved to johannesburg.

then i take myself to see mama mia. when i sit down, i search for my phone to turn it off, but i can’t find it and i don’t know whether i left it in the car or not. the movie is somewhat disappointing. i’m a die-hard meryl fan, but she doesn’t do it for me in this one. and pierce brosnan really shouldn’t attempt to sing. REALLY. all the while, i keep wondering whether i didn’t leave my phone somewhere. when i leave i speak to the manager of the cinema and use his phone to call mine. it’s turned off, usually a sure sign that the phone’s been stolen. fuck! typical, mercury retrograde!

i drive to the police station to report the loss, but the station is closed! wtf? when i get home, i discover a miracle (especially for south africa!). a good samaritan picked up my phone where i left it on the counter at kauai while picking up my vege-burger. he called my mom, and then called the b.f. and he was holding my phone for me till i could pick it up. my goodness, honest people still exist. thank you chris from northcliff!

and then i get message from po over at spindrifting seamonkey to say my blog’s won a seamonkey blogademy award! OMG, i’m speechless! ok, not really, but… my first blog award! first of all i’d like to thank dog – without that bitch, i wouldn’t have so much to moan about, i might have a few more pairs of unchewed shoes and bras and underwear, but still. and then i’d like to thank me, myself and i. i really couldn’t do it without you!

though all facetiousness aside, thanks po! really cool of you and congrats on yours! and so, i’m beginning to think i’m just going to ignore the fact that mercury’s retrograde and try to pollyanna my way through the next 6 weeks.

i even got up to go for an early morning run (5k’s – 33m57) and wasn’t phased by the uncharacteristic, steaming pile of shit one of my dog’s had left for me in the middle of the floor.

hey, at least it wasn’t on the carpet.

2 thoughts on “at least it wasn’t on the carpet!”