we moved to the new studio at the beginning of this year and one of the other actors discovered a boxing gym less than 1km down the road. he was so enthusiastic that he managed to rope in a number of people to check it out with him. having done lots of tae-bo and taught a version of it when i lived in l.a., i was keen to give it a bash, so to speak, but seeing that i had employed a trainer the day after i got back from doing survivor, i never got there. it took me about 9 months to realize that serious weight-lifting, combined with a recent penchant for apple-ciders, didn’t give me the body i wanted (let’s be content with a little bit of understatement here and leave it at that), so i decided i’d head over to the boxing gym.

2 kicking-my-butt-sideways-into-infinity-sessions later, i got sick with the dreadful flu that felled everyone and spent the next month dying – or at least feeling like i was. i could barely walk 3 steps without doing a serious imitation of the wolf desperate for some other white meat on the dinner menu! huff. puff! finally, last week, i was well enough to (reluctantly) make it back to the industrial building on maria rd, climb the stairs to the 3rd floor and once again, get tangled up in the skipping rope which seems to be my arch nemesis. there’s a timer that goes off and you’re supposed to skip for 4 minutes. hah! 10 seconds in the cramping in the calves start. all kinds of bits bob and jiggle and depending on the time of month, and if you’re me, you wish you could take your hands off the skipping rope handles and cradle your seriously swollen, sore mammaries instead.  i probably manage one minute of skipping before i start flagellating myself. 1 minute out of 4 – all of 25%!

i look around the room where the swish of the rope slices the air as a nimble-footed young adonis blithely reminds me that i never appreciated the many feats my 20 yr younger body was capable of. i just wish i’d discovered my athleticism earlier. if there’d been any kind of track and field program at our schools when i was a learner, i might have been a good track athlete. i remember running the 800m with hardly any training at one of our sports days when i was about 12 and not doing badly, but there was no athletic program.

anyway, good thing one of my mantras is, “it’s never too late”.

despite being distracted by the swish of rope and thwap of gloves on body-bags, i spy on the other side of the ring in the centre of the room: a treadmill. hallelujah! i can do a treadmill! this morning i get on the treadmill which at this hour, is directly in the path of a gloriously rising, and hot, sun. 2 minutes in i, who hardly ever sweat, am  short of breath and schwitzing! i am so tempted to quit, but from my running days a few years ago, i remember this little trick: fake yourself out! fake it till you make it.  i tell myself that i only have to do this for 5 minutes. then at 5 minutes, it’s, “you’ve got this far, just do 8,”. then it’s 10 and so forth. i guess it didn’t help that a few minutes in, the guy who runs the place came and shoved 2 weights in my hands. while i was only just barely dealing with running!

anyway, i’ll cut short the whine and just say, i did it! it’s amazing how one can push one’s limits – however minutely – when you use mindpower. i’m hoping that no injury or illness or my schedule gets in the way of my fitness aspirations.

so, (indulge my navel-gazing please); following on from my earlier post about reaching bottom – let me back up here (snicker) and say publicly;

i know i’m not obese.

i’m not even close to obese.  i’m sure there are many women who would love to have my shape, weight, whatever (you know, the grass is always greener…). i could probably gain 20lbs and still be in the “acceptable” weight range for my height – not even counting the substantial amount of leg muscle i’ve gained over the past few months from all my running. 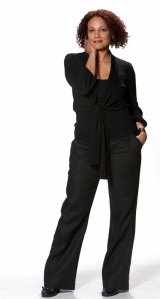 however, i am heavier than i’ve ever been (or at least close) and my clothes don’t fit the way i’d like them to. (though, admittedly the wardrobe stand-by on set yesterday commented on how much weight i’m losing and how good my wardrobe was looking!) and no, it’s not all in my head!

the problem, which i know some women would kill for, is the fact that though i maintain my overall shape, which has always been hour-glass, there’s just MORE of it. so my boobs get huge, the badonk-adonk, goes badonk-adonk-donk and i start feeling like i’m carrying a second person around with me.

anyway, i can honestly say i was nowhere near the front, or the back, of the line when they were handing out beauty (ok, so maybe i was a little closer to the front when it  came to T&A), but i got given enough to appreciate my place in line and i learnt over the years how to  fake it. so don’t think me ungrateful.

it’s just that at 44, i’m looking back and realizing that that body i was complaining about 10 years ago, was F@#$ING hot and i want it back (or even something just a little closer to it)! so much so that i’m okay with the fact that everything hurts today after my marathon gym session the other night. a few more sessions and the pain should fade into distant memory – till the next time.

ok. so this is a little experiment. i’m going to see if i can separate the purely fitness/running/exercise posts and put them on a separate page. just for my own edification.  the experiment didn’t work.

so it took a certain amount of talking to myself, but i made it to the gym tonight.

1 salsa class (which was okay, seeing that i’m not really a salsa afficianado – though, to toot my own horn, the level is such that i was still one of the best dancers in the class – not that that’s saying much! )

1 kata box class – led by the same guy with whom i’ve tag-teamed classes. i used to hate his class. he’s always off the beat and being an ex cardio-kick-boxing instructor, i know way more routines, but at least it got me moving and most of all – it got me really sweating for the first time in ages.

let’s see if i can keep this up.

uhm, this running thing…. hasn’t quite worked out the way i planned.

life and work seem to stick out their peg legs and trip up my training schedule. by now i was supposed to have completed my 10k, lost 10lbs, be svelte and muscular, in short, bionic woman. well, uhmn…not.

i long ago stopped following the original couch to 10k plan, what with injuries and long days at the studio and even though i’ve managed to get up to 8k’s last week, i haven’t been able to make it back to the track since. admittedly i did plan to make it to the track saturday, but i woke up to a day more grey and horrid than a pile of belly lint. plus cold enough to make the proverbial witches tit shrivel up even further and fall right off. so much for my planned track outing – i wound up on the couch under multiple comforters, watched the boob toob and knitted up a storm (yeah, i’m getting used to the “grandma” comments at work, but at least a number of the actors are walking around in various items created by my dexterous fingers). i don’t think i made it out of my pj’s for at least 36 hours, but i did knit my niece a beanie and 2 scarves – yeah, i’m prolific, and at least my fingers got some exercise!

sunday after waking really late, i felt sufficiently sloth-like to make me use the old mind over matter trick and take myself to the gym. i was planning on doing some interval training, but i started listening to “this american life” on my ipod and then just kept running, so wound up doing a 5 minute walk, stretched, then ran 40 minutes/5k’s (the treadmill, as i’ve said before, seems to measure distance differently to the track, so it seems to take much longer to cover any distance).

anyway to get back to what i said earlier, this running thing hasn’t worked out quite the way i planned.

i haven’t been able to train as often as i when i started out, but when i started out, i was out at the track, running maybe 1k, or 2. now i’m running between 5 and 8k’s every time and still i find myself heavier than i’ve ever been in my life. i think i’ve gained about 6k’s since i moved from l.a. – that’s about 15lbs! jeez! i’m horrified as i’m figuring this out right now! every time i think that i’ve finally reached my upper limit, or my bottom (ha-not-so-bloody-ha) to use program speak, i seem to exceed my expectations and my scale yet again. it’s gotten so drastic, i’ve even started back at the gym. i’m even considering “weight watchers”. 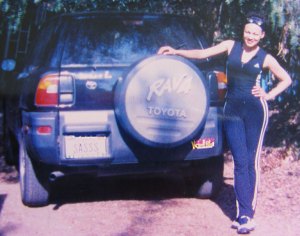 the irony is, i was a fitness instructor in l.a. for many years and taught endless kick-boxing classes. i was ACE certified, so i know the theory of how to reverse this awful trend, and yet…

i feel though, like i’m hitting my bottom (pun intended) or at least getting close. it’s time to lose the winter coat. time to use the many hula hoops sitting around, jump into the hoop and start unloading some. especially what with world hoop day coming soon – 8.8.08.