seems like i wasn’t the only one who had issues with uber this past weekend – in the states they were charging 9x the usual rate at peak times on halloween – and some people who were a tad inebriated when they summoned their ride, got a shock the next morning. 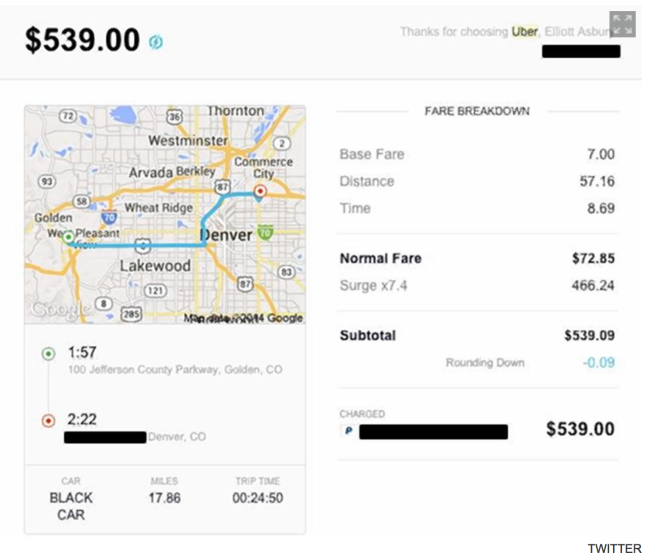 the reality is that you have to accept the rate before you can even order a ride, but here’s the crap part: so you decide to be responsible and knowing you’ll have a big night, you decide to use uber. at party’s end, even if you’re stone-cold-sober, you’re carless. all you want is to get home and horizontal and suddenly it feels like your ride is holding you to ransom. i understand a surcharge, 2x, 3x more, yes, but 9x!!! yikes. i think that’s something that’ll make me think twice about using the service if i know i’ll be needing it at peak times. admittedly, i had the choice of using one of the regular cabs who were available, but the whole point of my night, was that i’d be able to get to and from my destination and not have to worry about paying cash.

jenty commented on my previous blog on twitter and added @uber_joburg to the conversation and i must say that they followed up. my issue wasn’t so much the surge pricing, but the fact that the first driver cancelled on me after i’d been waiting for a while and that the second driver parked on the side of the road and made me, a woman on her own, walk 2 blocks at 1:30am in order to find him. the person who handles their support desk wrote me to explain that this was not acceptable and offered me a R45 credit to my account as an apology.

i certainly didn’t write my previous post in order to get financial compensation, and i give them an A for following up and responding, but i’m just going to shake my head and smile at that R45.