i finished the master cleanse. yes, i did! 10 days subsisting on lemon juice, maple syrup and cayenne pepper. i felt weak for a lot of it, but maybe also because i was working long days a the studio with one emotional scene after the other. it near killed me and there were many times when i looked at the apples in the fruit basket and thought they looked like manna, but i held out. i finished with the soup and slowly got back onto regular food. i’m still eating pretty healthfully. for the most part, no bread, still haven’t had more than a few sips of coffee  (though i have rediscovered chai tea, which i unfortunately can’t drink without at least some milk) and eating loads of veggies and fruits with most lunches and dinners consisting of salads. so yay for me.

all in all i lost about 6.5kgs of which i gained back about 2.5 of water weight and let’s face it, decomposing matter in the innards that comes from a regular diet, before it stabilized. i’m also exercising again.

ooh, which reminds me! i had 2 exercise firsts this last week.

about 2 months ago i visited bounty hunters, one of my favorite places which happens to be just about 1km from my house. i call it the cat shop cos it smells of cat piss and almost instantly makes me sneeze, but it’s a charity shop which is a treasure trove of other people’s discards.  when i walked in i spotted a bicycle which was a little scratched up, but  seemed to be in pretty good nick. a carbon framed raleigh rc3000  microsoft racing bike which i could lift with one hand. i immediately called the bf who is a keen cyclist and he recommended that i buy it immediately. turns out i got it for a steal.

however, those of you who’ve read my blog before know that i had a slight head over heels episode on a bicycle when i was a teenager which resulted in a  probable concussion, so i’m leary. to say the least.

last sunday, i gathered up my courage and the bf and i headed out to diepsloot to ride. we’ve only been once and i still have to take the bike to be professionally set up for me and have cleats added, but i think this might be something i do for a while. it was fun and challenging and someday maybe soon, i’ll start free-wheeling on the downhills instead of desperately riding the brake in fear for my life.

sunday afternoon i went to check out my friend, lady lea rocking the decks at sunday sushi with pixie bennett and had a fabulous time. ﻿ 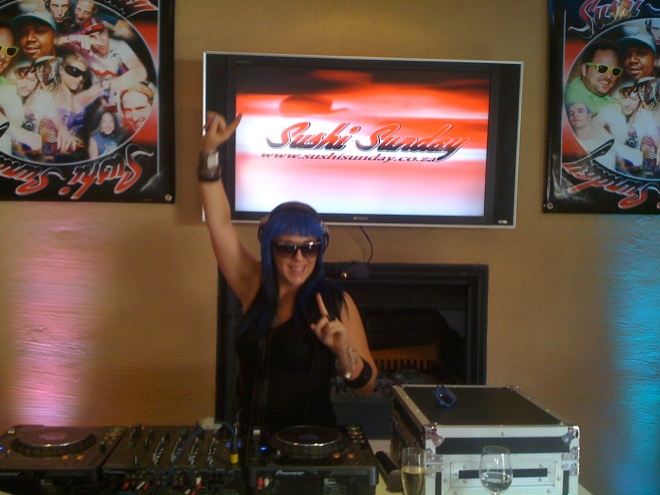 i’m “on holiday” this week, though i’m basically running around getting stuff done that i don’t normally get the time to do. stuff  like getting the car registration discs (did you know you can do it at some post offices these days?) and taking the dogs to get their rabies vaccination (if you’re in jhb, please make sure you get your dogs vaccinated. there’ve been a few outbreaks with one toddler dead).

i’m so damned long-winded/don’t post often enough that i think i’ll save the rest of this update for another post. i’ll just add that i was lucky enough to get a VVIP ticket to the all-white h2o party this weekend  from lea and i’m so excited! i love day parties.

so, what have you been up to?